Osvaldo Licini is the protagonist of the new exhibition at the Peggy Guggenheim Collection in Venice, curated by Luca Massimo Barbero: “Osvaldo Licini: Let Sheer Folly Sweep Me Away“, opened on 22 September, the exhibition will run until 14 January 2019.

It is held on the occasion of the 60th anniversary of the conferment of the Grand Prize for Painting of the Venice Biennale to the Italian artist.

A great retrospective dedicated to Licini’s work, to his life. A deep exhibition that continues the great work of knowledge and love for Art to which the founder, Peggy Guggenheim, has dedicated her life.

Let’s start from the beginning: Who is Osvaldo Licini?

In Art, as in Life, we must be frank. Osvaldo Licini is not Picasso. He is not Kandinsky. He is not Modigliani. He is not van Gogh.

And this is clear. But, if we really want to simplify, he’s a bit of all of them, woven together.

Osvaldo Licini was a great rebel of Art of the twentieth century, in the Italian and European settings, mainly.

Always looking for inspirations, for new ways to make art, and for new theoretical and philosophical bases that lead to reasoning.

Because the art of Licini is never groundless, never an end in itself. It is a representation of the various cycles of his thought, both at technical and theoretical levels.

The art of Licini is always synthetic, it makes a synthesis between the technique and the concept, the thought.

To explain this important exhibition, to transmit the knowledge of this artist, we must then know more about the life of Licini.

– Osvaldo Licini: The beginning of his artistic career (1910s)

The first work on display is also among the first paintings created by the artist. Born in the Italian province, in the Marches, in 1894, Licini presents himself with a self-portrait painted in 1913, when he was only 19 years old.

The work appears to us already significant: a boy with a proud face. His gaze is determined. The face doesn’t betray the embarrassment of the first times.

But above all: let’s see the painting. Thick and scratched painting, stretched almost with rage, with desire for affirmation.

An expressionist trend beginning to convey the strength of youth and the desire for adventure.

Between the 1920s and the 1930s, Licini is often in Paris. He knows the new avant-garde artists, their art, their experiments.

He is impressed, but not overwhelmed. He tried to introject the avant-garde and apply it to “traditional“ subjects, which are re-interpreted through the power of pictorial rendering.

The hilly landscapes of the Marches, his fatherland in Italy, become strong masses of color. The lines become more sinuous, they tremble. The colors are broken into stains that come together in a vibrant way.

Landscapes are a synthesis of the strong expressionism of van Gogh and the geometries of Cezanne. Never flat, always vibrant, curved, like moving.

The stupendous nudes are also contorted bodies. Marked by soft but direct lines, and filled with thick colors. Lights and shadows are clear. They give volume to the subjects. Modigliani’s lesson is well learned, and is re-proposed in a rabid way: the mass of bent bodies is conceived as something alive.

But Licini’s artistic curiosity has no boundaries.

He questions what he had done up to then and, in the 30s, in Paris, he approached the new abstract painting, “invented” only a few years earlier by Kandinsky.

From the beginning, however, Licini experimented a personal way of interpreting the abstract painting.

The expression of three-dimensionality had been delegated to the “perspective” for 500 years. With his abstract art, instead, Licini breaks the perspective lines as well as breaks the lines of the composition.

And precisely the angles that the lines form on the canvas, serve to transmit a new spatial, three-dimensional vision. As if these lines came out of the painting, they came against the spectator’s eyes. As if it were a “pop-up“ book.

In this period, a similar research, on abstract three-dimensionality, is carried out, in sculpture, by two great Italian sculptors, friends of Licini, Fausto Melotti and Lucio Fontana. Two works by them are in the Guggenheim’s exhibition too, to recreate a theoretical atmosphere.

All these works, by Melotti, Fontana and Licini, are united by a single concept: the search for space, three-dimensionality in the works, both sculptural (and therefore “really” three-dimensional), and pictorial, therefore, for their own nature, two-dimensional.

The meeting with the philosopher Franco Ciliberti leads to another turning point. Licini begins to meditate on the symbolic dimension of painting. On universal values, and on the ability to tell human and superhuman stories through art.

So he invents his “characters“.

The “Flying Dutchman” is a damned sailor, who represents the symbol of the “journey” as an attempt to overcome human limitations.

As the curator Barbero explains in the exhibition’s catalog: «He can be considered an alter ego of the artist who has chosen the existential dimension of “wandering” as one of the touchstones of his artistic and personal path».

The “Amalassunta” instead represents «the archetype of the “great mother” or “great Venus” common to all cultures».

The “Rebel Angel” is «the topos of overcoming the limit of the biblical struggle and consequent fall, resulting in the loss of the rebels’ angelic status».

Because it often happens that in the reflection of maturity, an artist tries to make a synthesis of the synthesis.

Then Licini tries to explain himself, and through himself, he tries to untangle the mystery of Humanity a little.

Always ready to continue his human and artistic research, even in the eyes of those who today, rediscovers his paintings.

In Venice, at the Peggy Guggenheim Collection. 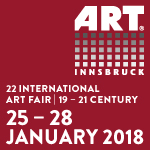