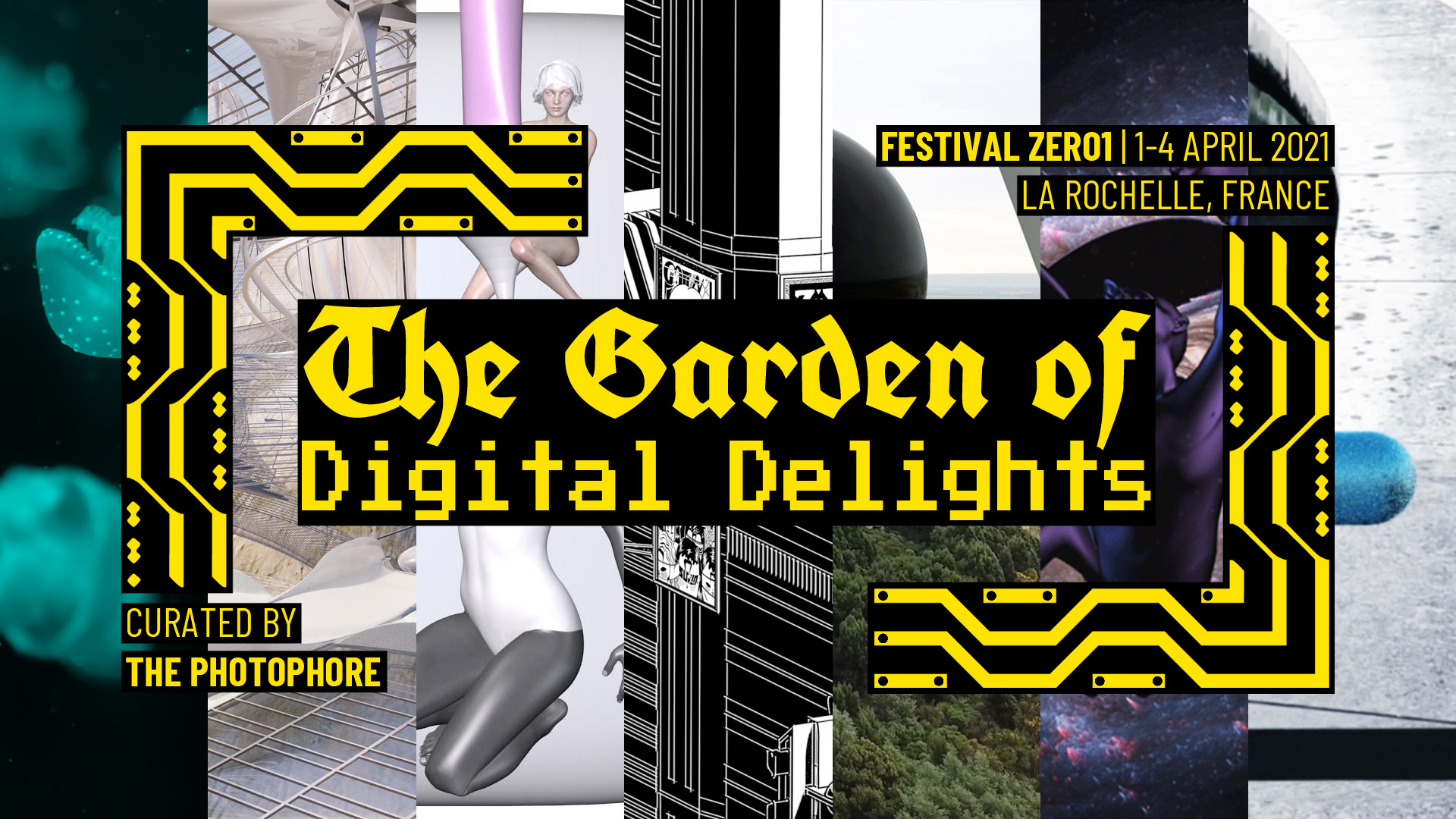 The exhibition “The Garden of Digital Delights” curated by The PhotoPhore’s co-founders Marica Denora and Domenico Fallacara, is part of FESTIVAL ZERO1, the festival of digital art and culture organized by La Rochelle University, from April 1 to 4, 2021.

Starting from Hieronymus Bosch’s “Garden of Earthly Delights”, the exhibition gathers a selection of new-media and video artists who are exploring the new boundaries of the digital world and digitalizing the reality through new technologies. The selected video pieces represent different elements of the real world (nature, landscape, living and human beings), transformed and recreated in the digital realm; a sort of digital cosmogony of the existence.

The exhibition aims to create an ideal parallel between the “ancient world”, analog and traditional, and the “new world”, contemporary and digital, which is still in the process of being formed and defined. Considering Bosch’s work as an attempt to summarize and translate cosmogony, cosmology and eschatology of the universe into art, “The Garden of Digital Delights” seeks to reread the same “philosophical categories” under the spotlight of recent digital transformations.

The questions that the “new world” suggests are manifold: how can this digital world be imagined? How can it be represented? What emotions come from its vision? How can we interact with it?

Following the Bosch’s triptych, the works are presented through an installation that reminds the physical structure and appearance of the original triptych, and are divided into 3 groups: one dedicated to the nature (as a new Eden) and the initial impact of the digital world with the “analog” reality, with artworks by Miguel Marino (AR) and Studio Above&Below (UK); a second section is dedicated to the “garden of digital delights” with artworks by Flavian Berar (UK) and Paulo Arraiano (PT); a third group of artworks is dedicated to the new forms of digital hybrids and chimeras created through the hyper-technological revolution, represented by Sandrine Deumier (FR) and Geriko (FR/BE). Opposite to the triptych installation we find the video projection of Cy Tone’s (IT) work: a distorted universe; a sort of digital version of the globe depicted on the exterior panels of Bosch’s masterpiece that represents “The Creation of the World”.

Similarly, the work “Terrain” by Studio Above&Below uses Augmented Reality to further connect the real world and the digital world. In their work, with the music by Einar Fehrholz, unnatural digital forms are suspended in the world that we all live in: digital enters in common life.

The work “Engines of Creation“, by the artist and architectural designer Flavian Berar, shows us the horizons achieved by architecture and architecture speculation, using computerized technologies. The base is a world similar to the real one, albeit digitally recreated. The work is an architectural essay film that responds to the existential threats posed by climate change, artificial intelligence and nanotechnology, exploring potential new directions that architecture might take, reacting to and against these potent forces.

On the other hand, Paulo Arraiano‘s “Sensorial Divinities” transports analog-digital hybridization to the level of living creatures, including humans. The idea of ​​the “cyborg”, the half-man and half-computer creature, a famous topos in science fiction, is taken up in a subliminal way. In Arraiano’s work, however, this analog and digital creature no longer appears as the fruit of the imagination: it is represented as “real”, possible thanks to the extreme and concrete development of computerized technologies.

In Sandrine Deumier‘s “Pink party” we find the “digital human” explores the new “digital world”, investigating, with apparent innocence, the vast possibilities that exist in it. There is no longer a higher morality that condemns behavior, everything is in the making and everything can be.

The latest work of this journey, the video “Anvil” by Geriko, marks the final step on this path. No longer the “end of the world” in absolute terms, as Bosch painted in his third panel, but the possible “end of the analog world”. In Geriko’s video, a human female figure moves herself entirely into the “digital world” to counter the overpopulation of the “analog world”. Her consciousness is then “digitized” and inserted into the new world, continuing to live only as a “sequence of numbers”, as a “digital entity”, a social “feed” on a screen. The woman leaves forever the real world, what in Bosch’s day was considered the only possible world.

Nowadays, the beginning of the “transfer” process depicted by Geriko has already begun (although in a not so extreme way). In our daily lives, part of the “reality” has moved on the internet, and personal “consciousness” migrates to social networks. In our world, therefore, real “digital worlds” are being formed, inhabited by an increasing number of people every day.

What remains to ask, then, at the exit from “The Garden of Digital Delights” is a conclusive, eschatological question: will the complete transfer from the “analog world” to the “digital world” be humanity’s final decision?