DE(EP)LIGHT: Dancing with Myself at Punta della Dogana 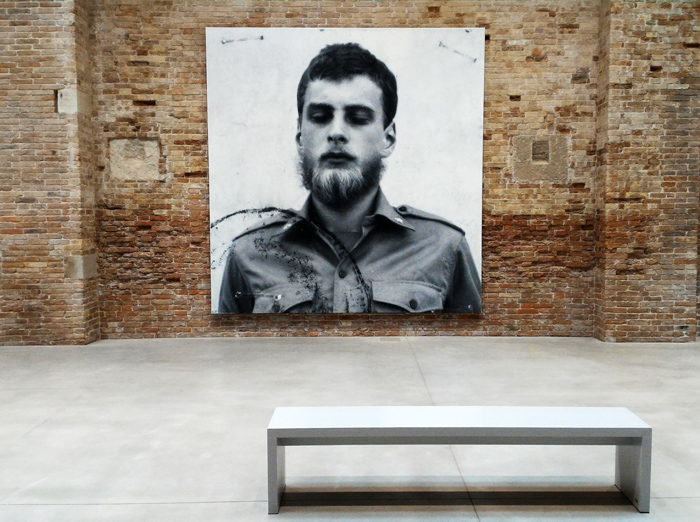 On April 8, 2018, the new exhibition realized by the Pinault Foundation, Dancing with Myself, opens at Punta della Dogana, Venice, and we were at the preview for you!

Dancing with Myself is composed by over 140 works by 32 artists, and aims to investigate the concept of self-portrait in art.

The title, borrowed from Billy Idol’s 80s hit, refers to the concept of “dance” paraphrasing it in the “artistic work” that artists perform with and on their own body, portraying and transfiguring it to exemplify the human condition.

“Dancing with Myself“, therefore, and not “Looking at Myself” or “Talking about Myself”, nor even “Dealing with Myself”, as Martin Bethenod himself explains in the catalog.

A “dance” that ranges from social criticism, as in the case of the works of Gilbert & George and Cindy Sherman, irony, as in Cattelan‘s work, and the concept of “body as a sculpture in the making“, as it happens in the works by Urs Fisher and Alighiero Boetti, just to name a few.

It is a dense, but also fluid exhibition. The first presentation of the exhibition appeared at the Folkwang Museum in 2016, in a more concise version conceived for the “white cube style” space of the German museum.

The Venetian version is extended, with 56 more works, and has been redesigned precisely for the flowing space of Punta della Dogana, which allows special glimpses and the possibility to relate the works in a completely site-specific way.

Dancing with Myself is an exhibition divided into several “official themes” – Melancholia, Identity Games, Political Autobiographies, Raw Material – but which also plays with sub-themes that the observer could find. One of these, for example, is that of the Flow of Time, a theme linked to the millennial history of Venice.

Within this sub-theme there is the comparison between the two great self-portraits by Rudolf Stingel [Untitled (Alpine 1976), 2007 and Louvre (After Sam), 2006], which see the artist in the shoes, respectively, of a proud a young soldier and a tired and resigned middle-aged gentleman.

The theme is easily found also in the works of Cindy Sherman, who retrace 30 years of the career of the US photographer in a “dance” that is almost a solo show within the great collective. Sherman is in fact an absolute protagonist of the exhibition, considering that there are 45 of her works.

There is, instead, only one exposed work by Urs Fisher. The work, Untitled , realized in 2011, is itself the representation of the flowing time.

Untitled is a life-size sculpture that represents the self-portrait of the artist seated at a table. Everything is made entirely of wax (including table and chair), and the work, once lit like a candle, is consuming during the time of the exhibition. This work in progress demonstrates, in a dramatically tangible way, the action of time on man and on things: a calm and inexorable destruction.

And then, there is him, the great protagonist of the long previous exhibition of the Pinault Foundation in Venice, Damien Hirst. The English artist remains in the Venetian space with two works created in very different times: the iconic With Dead Head, a photography realized in 1991, which portrays him as a boy next to the head of a corpse in the morgue of the Leeds anatomy school, and the inflated Bust of the Collector, 2016.

In the first work Hirst is portrayed as he laughs at the death that is next to him and therefore at the passing of time. In the second work, a legacy of Treasures from the Wreck of the Unbelievable, the bust of a mature, tense and thoughtful Hirst is portrayed, which seems more conscious of the things of the world (including death), although almost a contempt is always legible,  like a kind of stoic or cynical philosopher.

These two works, like others 114, are part of the Pinault Collection.

This is also an interesting point to “explain” the exhibition: the work of the curators was not an “absolute” research on the proposed theme, but rather a selection, between the works of the Pinault Collection and those of the Museum Folkwang, in order to create interpretative paths on the subject within the very wide range of material available.

It is not an exhibition that has fished in the mare magnum of Contemporary Art, but that has been able to use the works of the two institutions, to give value and scientificity to a varied and interesting theme.

The search for a common thread to relate the works is well thought out and not taken for granted: it is a healthy and cultural work within a context, that of the Pinault Collection, which does not exclude or put in the background (it would be stupid to do it ), the economic aspects related to art collecting.

Less strong than the incredible Treasures from the Wreck of the Unbelievable, the exhibition that preceded Dancing with Myself in the venues of the foundation in Venice, the new exhibition is a reflective show, with a more modest impact, perhaps, but well taken care of, suitable for those who want to reflect more calmly on Contemporary Art.

The right way to alternate emotions and reflections, compared to Hirst’s exhibition, explaining the breadth and diversity of the production of Art. To stay on the subject of dance and music, we could say that Dancing with Myself resembles a ballad, more quiet and reflective, almost more intimate, that the Art dj has cleverly proposed, enhancing the exhibition’s main traits compared to the last year’s hard rock show.