Exhibiting in Venice necessarily involves dealing with the beauty and majestic history of the city, and with the architects and artists who have honored it over the centuries. This comparison, which could be intimidating for someone, becomes a dialogue between titans when the Austrian artist Gottfried Helnwein – one of the most important and controversial contemporary German-speaking artists – presents his works in the Monumental Rooms of the Marciana Library in Venice.

On show until August 15, 11 large paintings by the artist, coming from private and museum collections such as the Albertina in Vienna, impose their presence alongside the works by Titian, Veronese and Tintoretto that adorn the Library. 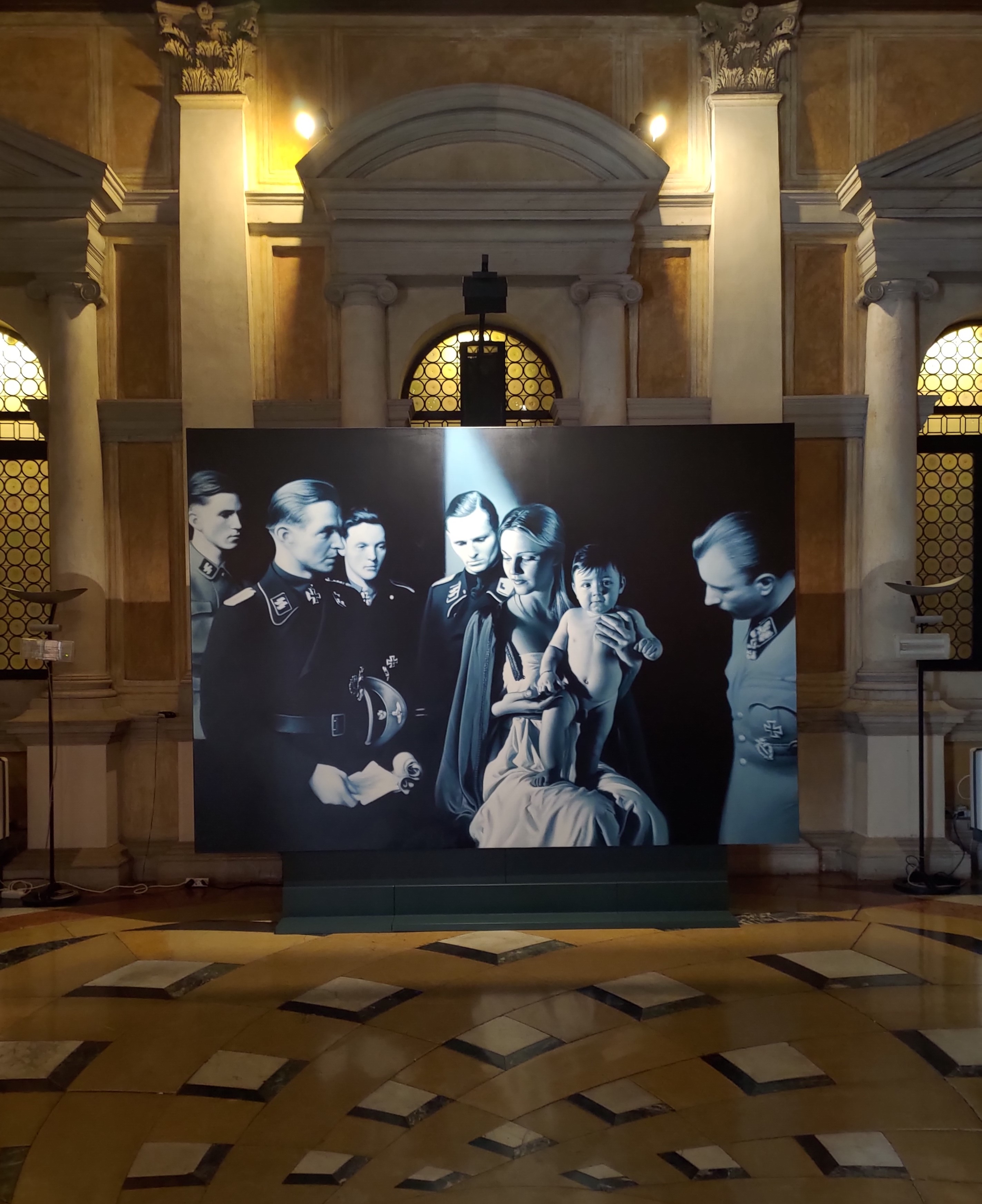 Helnwein’s paintings immediately capture the viewer thanks to the mastery they are painted with and the subjects they portray. Defined as “super-realistic“, as the art critic Paparoni explains, they not only perfectly represent the reality – with a rendering of the painting equal to that of a photography -, but they also surpass it, providing new meanings. The diaphanous children who populate the canvases – the main subjects of Helnwein’s art – often stare at the observer while they are covered in blood, wrapped in bandages, wearing military uniforms and with weapons in their hands.

There is an immediate opposition between symbols and images that refer to innocence (children, cartoon and manga characters, religious iconographies) and their inclusion in a context of evident violence (explosions and wars in the background, presence of bandages and blood, purple lights, uniforms of the Third Reich).

In “Disasters of War 75”, a young girl with a harsh gaze watches us silently (in “The silent glow” which titles the exhibition) while her face is covered in blood; a distorted Mickey Mouse with a disturbing grin emerges from a purplish background (“Pink Mouse 2”); a group of soldiers in Nazi uniforms plays the role of the Magi in a reinterpretation of the nativity (“Epiphany I – Adoration of the Magi 3“).

The subject of Helnwein’s art is the violence: violence in the past history – the heavy and traumatic legacy of the Austrian artist born in 1948; and in the present society. Children, with their dazzling vulnerability, immediately reflect this violence, and the responsibility of society towards the ugliness of history. Children are chosen as subjects of the canvases not only for their innocence, but also because they are still at an age that frees them from the superstructures that society will impose on them during their growth (and that will make them part and creators of that same violent society).

While children are the main subjects of Helnwein’s denunciation of the cruelty of history, the inclusion of cartoon characters in real war scenes “reminds everyone how difficult it is now to distinguish true from false, or reality from fantasy”, in our age of Post-truth. A difficulty that has already shown all its dangerousness and violent power in current history.